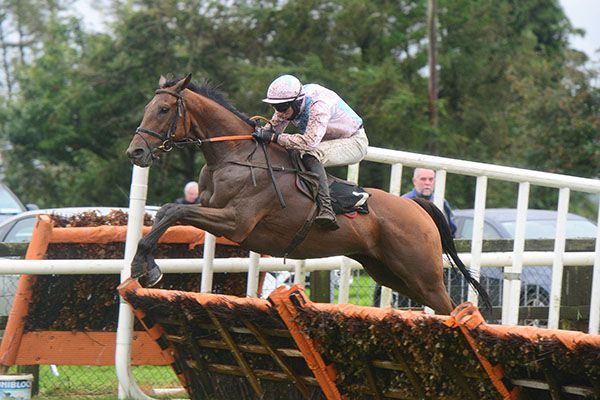 In doing so he paid another compliment to the form of the extended two mile handicap hurdle he finished eighth in at the Galway Festival. No less than five different winners have come out of that race now.

Walsh went for home coming down the hill and his mount had too much ammunition for Muhaafiz over the last two flights.

Trainer Sarah Dawson said: “I was delighted with that. Both times that he’s won before it has bucketed with rain on the morning of the race so I knew he had his ground.

“He’s been in great form. The ground didn’t go as soft as I would have hoped in Galway. The two miles on good ground there was a bit too short.

“Actually the form of that race has turned out very good anyway. I would have been hopeful there on softer ground as he likes it around there. He was second there on the Flat.

“I’m the only person here delighted to be soaked!

“Eoin gets on with him brilliantly and knows him inside out.

“We’ll chop and change it with him now, he’ll go over fences once we get our ground and a course that suits.

“We’re really looking forward to that and we think the best is yet to come.”